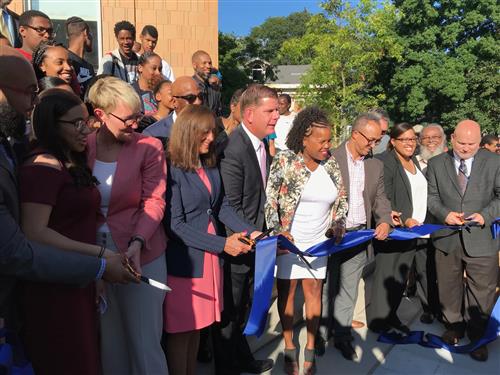 Pepper the Robot greeted visitors at Dearborn STEM Academy along with Haruna Hosokawa, program director of STEM and robotics initiatives for BPS.

The building was designed by the firm Jonathan Levi Architects of Boston and built by Gilbane, Inc. in partnership with Janey Construction Management. The design and construction of the project was managed by the City of Boston Public Facilities Department in collaboration with Daedalus Project Managers.

“I am thrilled to open the Dearborn STEM Academy and continue the trend of new beginnings in the City of Boston,” said Mayor Walsh. “Students, teachers, and families are excited for all the possibilities the new year brings. And we, as a City, are making historic investments in our youth and our communities. I can’t wait to see this school grow, and know that Dearborn students are going to do remarkable things in their new home.”

The Dearborn STEM Academy was built to serve 600 BPS students by 2020. Currently, 488 students are enrolled as the school begins to expand.

“This magnificent school — and the powerful educational work that will happen within it — truly demonstrates to our students that the Boston Public Schools cares about them, and that we believe they have what it takes to succeed in the innovation economy,” said BPS Interim Superintendent Laura Perille. “Today’s celebration represents years of thoughtful collaboration with local and state government, and many community organizations and partners. I could not be more excited.”

“The opening of the new Dearborn STEM Academy shows our students that the possibilities are endless,” said Jesse Solomon, executive director of BPE. “In Boston, we live in one of the most thriving STEM economies in the country, and our students can literally see it from their classroom windows. This new building and our school's programs and design can help our students access Boston's many professional opportunities.”

An exterior photo of the Dearborn STEM 6-12 Early College Academy on Winthrop Street in Roxbury. (Photo was taken before the ribbon-cutting ceremony.)

Francilliana Barbosa of Dorchester, an eleventh-grade student this year, spoke during the ceremony about the many opportunities she was provided as a student at Dearborn STEM, including her experience building her own toiletry organizer business through the BUILD entrepreneurship program, and an internship at Massachusetts General Hospital.

“The Dearborn has provided many students, including myself, with opportunities that are productive, educational, and interactive,” Barbosa said. “I have grown so much because of my experiences at Dearborn. I am so grateful that we have this new building, which will help challenge us, and further our STEM education and 21st century skills.” 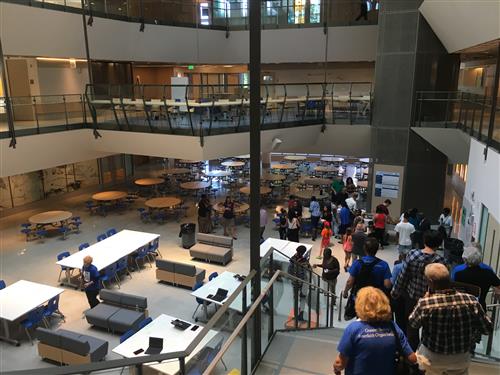 An interior photo of the center atrium of the Dearborn STEM Academy during the public tour on August 23, 2018.

The design of the new school is based upon the project-based learning curriculum. The academic spaces are organized by cohort, which includes educational classrooms, science laboratories, special education instructional space, and shared amenities.

“Students, staff and community members will be in awe as they walk into this building,” said Boston School Committee Chairperson Michael Loconto. “This vibrant school is a space that will motivate and engage our students to contribute to the positive development of their communities and beyond.”

Visitors observe image cutting equipment with a volunteer from General Electric in one of the two "fab labs" (fabrication labs) at the new Dearborn STEM Academy.

Joshua Fidalgo, a Roxbury native who works as dean of students at the Dearborn, said the new building represents promise for his students.

“This is not just a building, but an opportunity — an opportunity for students in a neighborhood that is all too often overlooked,” Fidalgo said. “These students work just as hard as anyone else, and have dreams just as big. This new, state-of-the-art STEM building shows them that they can do anything.”

A large crowd of community members attended the ribbon-cutting ceremony of the Dearborn STEM 6-12 Early College Academy in Roxbury.

The $73 million facility was the first new school construction project in the Boston Public Schools in 15 years, and is seen as a model for future projects through the BuildBPS educational and facilities master plan. About $37 million of the total cost was reimbursed by the Massachusetts School Building Authority (MSBA).

Since 2014, Mayor Walsh and BPS have secured more than $110 million in MSBA funds to support new school buildings and facility renovations, which includes $30 million from the MSBA Accelerated Repair Program to fund for new boilers, windows, and roofs in school buildings across the City.

The MSBA is the authority set up by the Commonwealth to help finance public school capital projects. However, despite Boston being the leading source of the sales taxes that fund the MSBA, and having the state's largest school district, Boston never drew in a significant way on MSBA funding before the Dearborn STEM Academy project began.

The school is the result of an ongoing public-private partnership, with continued support from the Greater Boston Interfaith Organization, Roxbury Presbyterian Church, Dudley Street Neighborhood Initiative, and a number of philanthropic and nonprofit partners.

Located at 36 Winthrop Street in Roxbury, the new Dearborn STEM Academy is at the same location of the Henry Dearborn School, which was built in 1913 when it opened as the High School of Practical Arts. At the time, the school taught classes in cooking, laundry, sewing, nursing, and home economics for young women. The school was closed and re-opened in 1954 as Girls’ High School. It operated as Roxbury High School from 1974-1981; and it was designated the Henry Dearborn School in 1981. Since 2014, Dearborn STEM Academy has operated in a shared space with the Jeremiah E. Burke High School in Dorchester while the current building was under construction.