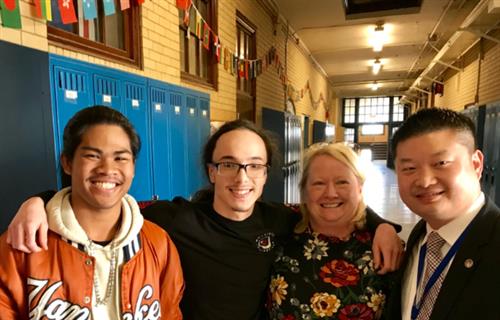 Since 1999, Posse Boston Scholars have earned more than $129 million in leadership scholarships. This year, 60 students from the Boston area, including 24 in BPS, were awarded scholarships collectively worth $11.9 million from Bryn Mawr College, Bucknell University, Centre College, Denison University, Hamilton College, and Union College.

Of the more than 17,500 students from across the country who were nominated for the Posse Scholarship this year, 750 were selected for this prestigious award.

“Congratulations to all the Posse Scholars. The Posse Foundation provides our young people true opportunities for lifelong success,” said Boston Mayor Martin J. Walsh. “As we look to increase college admissions for Boston Public Schools students, The Posse Foundation does a tremendous job in helping us reach that goal.”

In his inauguration speech on January 1, Mayor Walsh invited colleges and universities in Boston to add at least 100 new full scholarships for Boston students. He said that, in 2016, 710 Boston residents attended private colleges in the City on scholarships worth roughly $32 million — marking a 14% increase from four years earlier. He praised Boston University for enrolling 80 new BPS graduates this year alone.

Malik Irish, 18, of Dorchester, is using his Posse Scholarship toward his education at Hamilton College, where he will attend in the fall to study computer science. Irish is a current student at TechBoston Academy in Dorchester, where he took advantage of an after-school coding course and an AP computer science class, and now wants to explore a career in cyber security.

“You hear about an increasing number of cyber security attacks, and how there aren’t enough people to solve the problem,” Irish said. “I want to know how we can stop things like that from happening.”

Posse extends to students the opportunity to pursue personal and academic excellence by placing them in supportive, multicultural teams—Posses—of ten students. To date, 8,484 Posse Scholars have been awarded more than $1.2 billion in scholarships to 57 partner colleges and universities.

Most importantly, Posse Scholars graduate at a rate of 90 percent and are active leaders on their campuses and in the workforce.

“The Posse Scholars are outstanding students and our future leaders,” said BPS Superintendent Tommy Chang. “The Posse Foundation is helping us close opportunity and achievement gaps by providing strong support for these high-performing students as they aim to excel in college, career, and life.”

Leanne Allen, 18, of Roslindale, is a senior at West Roxbury Academy who excels in AP English and has been accepted to Union College in Schenectady, New York. She said her childhood “wasn’t always easy” due to family issues that caused her to move homes frequently when she was younger, and is grateful that the Posse Scholarship helps her pursue an education in creative writing.

“I’m a big believer that, no matter what your circumstances, you can always persevere,” Allen said. “I encourage everyone to apply for the Posse Scholarship. There is always something special about each person, and Posse will spot that in you.”

“We can’t wait to see these young leaders from BPS take their immense talent to our partner schools and into the workforce,” said Posse Boston Director Andrew Gallagher. “They’ll join a national network of Posse Scholars who are ready to solve problems and bring their powerful voices to the tables where important decisions are made.”

Students were selected for this award due to their tremendous leadership and academic potential. The Posse Foundation is a national initiative with program chapters in Atlanta, the San Francisco Bay Area, Boston, Chicago, Houston, Los Angeles, Miami, New Orleans, New York City and Washington, D.C.

For more information about The Posse Foundation, please visitwww.possefoundation.org.

Here is a list of the Posse Scholarship recipients: