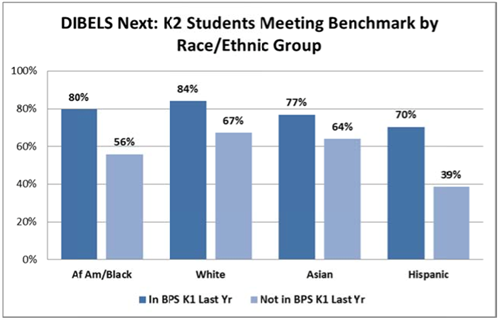 BPS currently offers more than 2,300 pre-kindergarten K1 seats. Mayor Martin J. Walsh has pledged a significant expansion of the program, with a $1 million investment to add 100 additional seats next year and a more dramatic increase in the future. In 2013, more than 3,000 families applied for the city’s free K1 program.

“Early education is the key to eliminating achievement gaps and ensuring every child has the tools they need to learn and grow in elementary school,” Mayor Walsh said. “The results from this study support our belief that we must expand K1 opportunities so many more children can benefit.”

Walsh made the remarks during a visit last week by a group of community leaders and educators from Seattle, who are observing the BPS early-education program in an effort to bring Boston’s successful model to the west coast. (watch a video of the visit on the BPS YouTube Channel)

The results are encouraging and worthy of closer inspection," said Michael O'Neill, School Committee Chair. "The School Committee has prioritized literacy at an early age for our youth and this study certainly indicates that Pre-K helps better position our younger students to be better prepared to succeed. We applaud Mayor Walsh's focus on this issue and appreciate the additional funding he has provided to help us expand these opportunities."

The internal BPS study relies on results from the Dynamic Indicators of Basic Early Literacy Skills (DIBELS) assessment.  Among the highlights:

According to the study, the academic improvements were even more dramatic for African-American and Hispanic/Latino students:

“These findings provide even more indications that Boston’s teachers are doing excellent work with our youngest children,” said BPS Interim Superintendent John McDonough. “We are among the most diverse school districts in the United States, and this study offers encouraging evidence that we are on track to eliminate achievement gaps and prepare all children for success.”

The study also examined results by socioeconomic and disability status:

The full study is available at bostonpublicschools.org/reports. Last year, a Harvard study published by the Society for Research in Child Development found the academic gains achieved by students in the BPS early childhood programs are the “largest found to date in evaluations of large-scale public pre-kindergarten programs.”