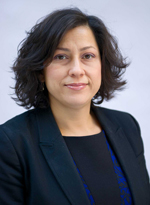 Alexandra Oliver-Dávila is a BPS parent. For more than 20 years, Alex has worked to create a community that supports Latino youth, values their input, and believes in their ability to create positive social change. Serving as Executive Director since 1999, Alex has transformed Sociedad Latina into a cutting-edge, data-driven, creative youth development organization. Under her leadership, Sociedad Latina has increased and diversified its budget, expanded board membership, increased the number of youth and families it works with and expanded programming.

Through her grassroots community-based approach, Alex has forged cross-sector collaborations with dozens of partners, including colleges, hospitals, businesses, foundations and schools. This broad network of partnerships has enabled Sociedad Latina to leverage resources and offer youth greater access and opportunities to thrive. In addition, Alex serves as a Community Advisory Board representative for Children's Hospital Boston, Dana-Farber Cancer Institute, New England Baptist Hospital, Beth Israel and the Boston After School and Beyond. Alex also serves as a trustee of Emmanuel College, a trustee of the Anna B Stearns Foundation, a board member of the Coalition of Schools of Educating Boys of Color (COSEBOC), and was the previous co-chair of the Greater Boston Latino Network (GBLN).

In recognition for her hard work and dedication to the Latino community in Boston, Alex has received a number of honors and recognitions over the years. In 2018, Alex was selected by The Partnership to participate in the Next Generation Executive Leadership program and was named one of Boston’s Most 100 Influential People of Color by Get Konnected. In 2016 Alex was named one of YW’s 150 Women of Influence. Alex has been honored several times on El Planeta’s Powermeter 100 Most Powerful People for Massachusetts’ Latinos. In 2012, Alex received an Honorary Doctorate from Emmanuel College and the Hispanic Heritage Leadership Award from the National Football League. In 2007, Alex was honored as a Barr Foundation Fellow – a program that recognizes Boston’s most gifted and experienced leaders. She also received the Freedom House Community Leader Award in 2006 and the Boston Celtics’ Hero Among Us Award in 2002. During her career, Alex has also received honors from Mayor Thomas Menino, the Boston Police Department, and Boston City Council. Alex holds a Bachelor’s Degree from Emmanuel College and a Master’s in Public Policy from Tufts University.